You are here: Home » All Posts » Countries » Backpacking Australia » Airlie Beach and the Wicked Whitsundays

G’day mate. How ya going? Crikey! Too easy! Sweeeet!

See, tongue piercings don’t make you lisp, they make you sound Australian you bunch of flamin’ galahs! Ha ha! 🙂 So Andy’s last blog left you with a bar through my tongue and a fishing rod in his hand just outside of Townsville…

During our road trip we had been camping in free rest areas by the side of the Bruce highway, sometimes illegally camping near beaches, when we needed a shower and to get some laundry done we’d pay to stay in a proper campsite. So the morning we rolled into Airlie beach and were confronted by all the scary ‘Camping Prohibited – Heavy Fines Apply’ signs we started to realise we wouldn’t get away with a car park that night. It was the end of September during the kid’s school half term, so Airlie beach was packed full of Aussie holiday makers, meaning we wouldn’t be able to check into a campsite either then, since none had any space. Damn! We also started to panic a little when all the travel agents told us that the boats were fully booked for the next 4 days. We only wanted to stay here one night, go out on a boat trip to the famous Whitsundays and Whitehaven beach and be off again, away from the crowds, because lets face it, the town itself isn’t what draws people to this neck of the woods.

Ok, so don’t laugh (we were desperate!), we ended up paying to stay in 1 of 4 powered sights in the car park of the biggest bar/club in town – Magnums, where all the Aussie stag and hen parties go plus backpackers from around the world for a massive jolly up till the early hours of the morning. If you didn’t fall under that category, you were there to watch Aussie Rules football on one of the 10 huge screens they had. We’d be lulled asleep at night to the sounds of ‘We no speak Americano’ over and over, then make breakfast in the mornings to the chorus of people throwing up in their backpacker huts behind our van. A truly exquisite experience I can tell you, and we endured it for 4 days till we finally got ourselves booked onto a boat tour of the Whitsundays. Yay!

Until that day, we spent most of our time either at the brilliant lagoon they have by the sea front (like an outdoor set of swimming pools but with rocks, trees and a playground for kids), walking to the harbour via a mangrove boardwalk or fishing off the new docks on the other side of town whilst watching turtles swim by. Yes Andy finally got to fish! He didn’t catch anything till the day we left, when we got up at 5am to fish in the changing tide. He caught a good sized Thread Fin (also known as a Blue Salmon), which we would later eat. Yum!

On the day of our boat trip, we woke up excited and couldn’t wait to get out on that perfect blue sea to the famous beach we’d heard so much about. We booked with a company called Ocean Rafting which departed everyday from the Crystal Sands resort (a very posh looking place). When we arrived we booked our lunch onboard straight away and hired a couple of wetsuits too. Then once everyone had turned up, we were put onto 4 different boats and guess what, we had the fastest! Called Thunderstruck, it had 4 outboard motors giving it a rocketing 700 horsepower oomph! Oh man did it take off, and to show off it’s power, Tim the captain waited 15 mins after the other 3 boats had left before thrashing us into the sea and past the others waving. It was WICKED! 🙂

After 40 mins of white knuckle joy riding and mid-sea donuts, we arrived at our snorkel spot and straight away saw some turtles and a shoal of big fish. We threw on our wet suits, masks and snorkel and jumped in. Andy had been so used to scuba diving recently that he inhaled as he hit the water (forgetting a snorkel is not a respirator), resulting in him choking and nearly throwing up. DOH! Not a great start! Ha ha! After a while of floating around not seeing much, I decided to get out and dry off. Andy stayed out for longer seeing a turtle swim right under him!

Back onboard we took off again around some of the Whitsunday islands and to our second stop where we got off, walked through some bush up to a viewing point. Wow the hot and steep walk was worth it! At the top we were all treated to an amazing view of the drifting sands below (check out our photos, it’s unreal!), stingrays swimming in the shallows and Whitehaven beach in the distance. Around the lush green islands were a swirl of whites, blues and aqua-marine colours. Breathtaking! We couldn’t wait to get down there and experience the pure, soft sand on Whitehaven. As the formation of the bay has protected the beaches from the weather and drifting tides for centuries, the sand hasn’t moved and so has now turned to pure silica.

Everyone in the group was now extremely eager to get onto that beach, so there was quite a rush when our boat anchored up onto Whitehaven. We pulled up between the millionaires having lunch next to their private helicopters or their giant yachts. As I stepped off that ladder, I felt my toes sink into the flour-like sand and I couldn’t stop myself from smiling. It sang and squeaked as you walked through it and was so reflective, a very even tan/burn could be easily achieved.

We sat on the shoreline eating our buffet lunch, hunching over our plates as the sea gulls swooped us to steal a quick bite. They were even attacking people walking down the ladder from the boat onto the shore. They’ve done this before we thought as one woman screamed, losing grip of the finely balanced plate of food in one hand and the ladder in the other. Clever little bastards! Entertained us for an hour though! When we were finished laughing at people falling into the sea after a gull mobbing, we then had a dip in the cool crystal clear water ourselves. This place was truly paradise, maybe just a little crowded but paradise nonetheless.

After a couple of hours we were back on board Thunderstruck heading for Airlie beach. Tim the captain opened up the engines and purposely followed other boats to take us over their wake. We hit each one with full speed, launching us into the air. With the command ‘bloody hell hold on!!!’, we held on for our lives and smashed back down after getting some amazing air. Fantastic! It was so thrilling we didn’t want it to end, but unfortunately we got back to the harbour pretty quickly and our adventure was over. I would recommend Ocean Rafting to anyone wanting to see the Whitsunday Islands and Whitehaven beach. They are the original and still the best! 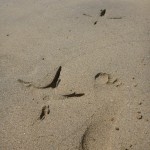 Jabiru footprints next to mine 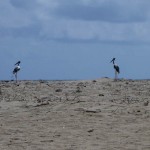 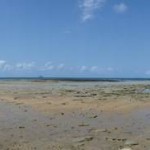 Lovely day for walking on a beautiful beach 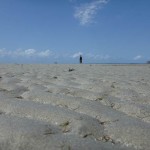 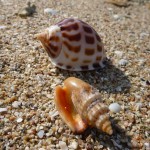 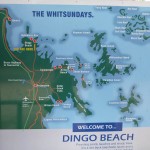 Andy showing you guys exactly where we are 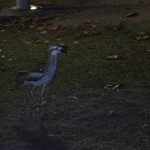 Our friend the Bush Stone Curlew, a very suspicious looking bird! Creeps up on you 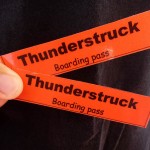 Our tickets to Whitehaven Beach with Ocean Rafting. We were on the fastest boat – Thunderstruck! 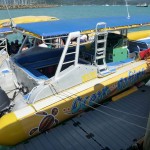 Getting ready to go! 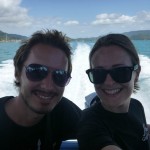 On the back of the boat chillin

Andy taking a dip over the coral reef 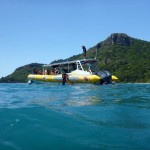 My view of Thunderstruck 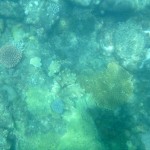 Not the best snorkeling, a little cloudy but still fun! 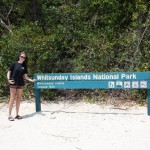 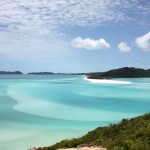 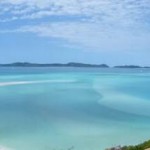 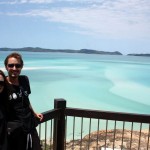 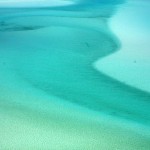 Check out those blues! 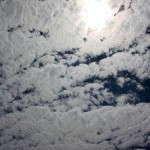 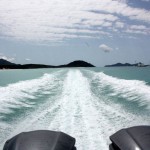 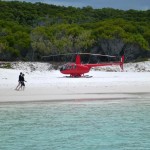 Oh how the other half live eh! Is that an ironic statement? 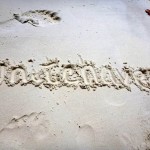 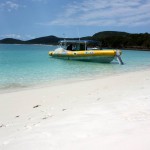 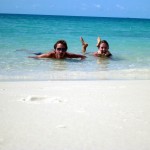 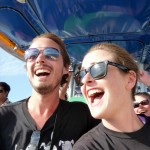 Sat at the front going home, man it was fast! 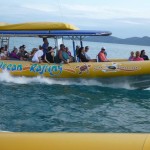 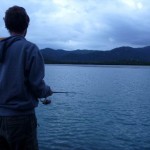 Andy fishing from the new docks at 5am

Within half an hour he’d caught a fish! 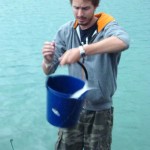 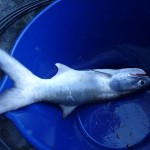 3 thoughts on “Airlie Beach and the Wicked Whitsundays”