You are here: Home » All Posts » Countries » Thailand » Back in Bangkok and the Burma railway

Sure enough we were now back in that big city which had tried to scam us left, right and centre two months ago when we started our loop of south east Asia. We’d decided to stay more central in the city, away from the Khao San road this time in the business and shopping district in a cool little place called the Wendy House, it rocked! We spent the rest of the day walking around the huge MBK centre close to our hostel. It’s a huge shopping centre full of everything, mainly knock off, that you could ever think you might need. We prepared ourselves for Bali with some Indonesian food in the food court and then called it a day.

The next day we headed to the Hua Lamphong station and booked onto the following day’s Kanchanaburi tour, more on that later. We then walked around a few other huge shopping centres, not really buying anything just taking it all in. Then we headed north out to the Chatuchak weekend market. This place was insanely huge and rammed. In 4 hours we’d probably only seen a tiny part of it. You can buy maps of the place to help you get to the right part as different areas sell different goods. Emma bought some t-shirts and we then stopped for a very skanky cold lunch. The menu cheered us up though, as menus often do. This place sold ‘ broccoli wish caispy pork’ and also ‘vegetable sales page’. I might set up a business as a menu correction consultant, there are plenty to sort out.

The next day at 6:00am we caught a very old train that runs as a special tourist service at the weekends, mainly for Thais, out to Kanchanaburi. Both of us were suffering the aftereffects of a green curry from the night before which reached near nuclear levels of chilli heat. Thanks to my dodgy guts it was all long gone from my system by the time we boarded the train, Emma however had a very angry beast lurking inside her.

I need to give you all a little background info now on why we were making this trip. During the second world war my grandfather Joseph Bucchannon Gilchrist had been captured by the Japanese in Singapore and transported to a concentration camp as a POW. He’d been forced to work building the Burma railway, commonly referred to as the death railway due to the number of lives lost building the thing. Without going into the details let’s just say he suffered a lot here, overworked and underfed with no medicine when he would have needed it. Since the allies controlled the seas around Thailand and Burma, the railway provided a link for the Japanese to transport supplies through the area with lesser risk of attack. I was very keen to get out to this place in the middle of nowhere to retrace my Grandad’s steps and to understand a little better what he had gone through. Of course he survived this ordeal, though returned home I’m sure a different person to the young man he’d been. I can remember him telling me war stories when I was young that went over my head, I wasn’t interested enough to take in what he’d said. I wish I’d paid more attention so I could understand exactly where he’d been and what actually happened.

Now back to our train ride. The carriages on the train were cooled by prehistoric ceiling fans, so all of the windows had to be open to get some air moving through the place, it was pretty hot. A very cheerful elderly Thai man in an immaculate uniform paced up and down the two carriages of the train jibbering away through his loud hailer in Thai. I’d loved to have known what he was telling us, he was cracking jokes constantly which even he found hilarious. It was clear he was talking about the history of the place which sadly was all going over our heads.

The train made its first stop at Nakon Pathom where our Thai conductor issued instructions for when we should be back. We all got up and left the train, a little unsure of what we were off to see. We were also unsure how long we had to see this thing we would be seeing since we don’t understand Thai. This was generally how the day panned out, us following Thai people when they headed back to the train. So we left the tiny station and walked along a wide street lined by food vendors who were clearly expecting us. They were selling cut up pineapple and also some deep-fried crickets, it was like being back in Beijing! At the end of the street was a magnificent temple, I think called a Chedi. To get to it we had to walk past a set of temporary gates that for some reason a weightlifter was lifting in the air, he looked like a Thai Mr Motivator. A ceremony seemed to be going on at the temple, we could hear music and chanting. We walked the circumference and then headed back to our train. After pulling away we were now entering real rural Thailand. Just farms and jungle from now on, huge storks stood in the fields and cotton like seeds were blowing in through the open windows of the train.

A few sweaty hours later we passed Kanchanaburi and reached the bridge over the river Kwai. At this point Emma’s internal beast was making itself known to her and she was in a bad way. The squat toilets here were unfit for the purpose so Emma had to just hang on. We walked over the bridge and admired the lovely scenery. The river was very pretty and had a couple of restaurants now lining the edges. We walked the length of the bridge and back trying to imagine what it must have been like here 70 years ago. It’s a beautiful place and I wondered whether my Grandad ever could enjoy the views or whether he was too tired and hungry to? Back on the train it now passed over the bridge with us on board. We carried on through deep hand-cut stone passages, POWs had worked away at that stone. It was so close to the side of the train and we were moving so slowly that we could touch it. The reality of the work involved in building this railway in hot jungle now sunk in a little bit more, it’s not as simple as laying tracks. We passed over the Wang Po viaduct, again built by POWs. There was a lovely view of the river at this point. Finally we stopped at the end of the restored section of the railway, it carried on further to hellfire pass and beyond but we wouldn’t be able to venture that far today. We were now able to explore some nearby waterfalls and view one of the old steam locomotives that would have run along this track. We popped into a 7eleven for a typical backpackers lunch of a ham and cheese toastie for pittance and then chilled out on some seats we found. A group of Buddhist monks came and sat near us and soon after we got talking with them. They were very interested as to why we were there which I tried to explain, I’m not sure if they understood! They were very interested in my beads I wear around my wrist. They told me they were prayer beads and very impressed when I told them I’d bought them in China. We told them about the terrifying mount Hua Shan we’d visited there which they knew of. They then wanted to know what football team I supported, again a little tricky to explain that I don’t follow football. One of the monks supported Chelsea and apparently could watch every premiership match at his temple! Being a monk doesn’t sound that tough after all.

When our time was up we got back on our baking hot carriage and started heading back on ourselves, back over the viaduct, over the bridge stopping now at Kanchanaburi itself this time. Having done a bit of research I was aware that as well as there being the Chungkai cemetery for the POWs who died here there was also a small museum about the history of the railway. We sprinted from the train seeing the cemetery quickly before rushing through the museum. We didn’t know how long we had and so didn’t really do the museum justice. We were able to see lots of testimonies of how tough life was in the camps, the rotten rice they were given and the scale of what they had built. Pictures of the starving men in the camps struck home how little they were fed. There was even a recreation of the railway carriages used to transport the POWs here, huge groups of men stuffed into tiny metal boxes with a small hole to let air in, it must have been truly terrifying. It made us realise how good we had it in our little train coming here. Above all I realised what a tough guy my Grandfather was to have survived this when others were passing away around him daily. He’d spent several years as a prisoner in these conditions and survived to tell the tale.

Back on the train after running back, we headed back to Bangkok with no further stops. We must have arrived at about 8:00pm in the dark and realised how grubby we both were from the dust pouring in through the train’s open windows. After a lot of washes my white t-shirt is still stained from it! We caught a tuk tuk for that final Bangkok experience. Surprisingly he wanted to take us to a gem shop, I told him we’d get out and wouldn’t pay if he did. We negotiated 90 baht for the fare down from some stupidly high figure to begin with. He then took off driving like an imbecile through the busy traffic. He stopped in the fourth lane of a busy road telling us to get out there, no chance! We weren’t even where he was supposed to take us anyway so I told him to carry on. Finally we arrived at the MBK centre where surprise surprise he didn’t have 10 baht change for my 100 note. We said our goodbyes to the driver letting each other know what we thought of one another and stuffed our faces on a dirty McDonalds pleased that this time Bangkok hadn’t been such a nightmare. The tuk tuk driver was the worst thing we’d experienced this time, we realised that what area you stay in makes a huge difference in Bangkok.

The next day we took another train ride, this time in ice cold air conditioned luxury to the airport. Before we knew it we were seeing small paradise islands jutting out of the ocean from our plane window and very soon we’d landed in Phuket for two weeks of island hopping. 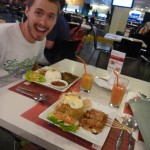 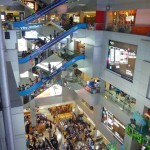 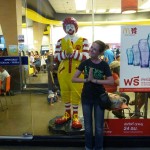 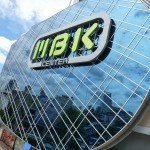 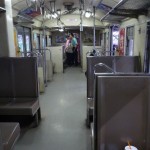 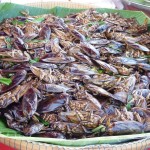 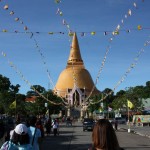 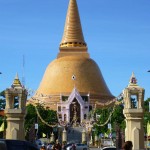 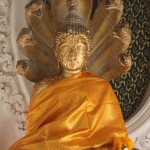 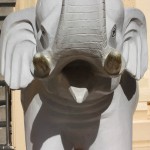 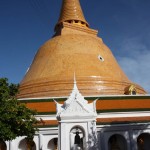 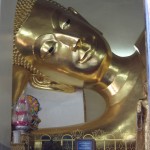 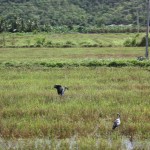 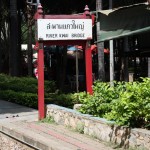 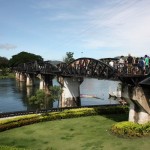 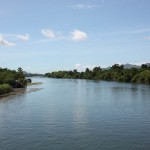 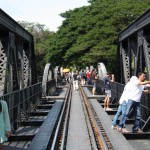 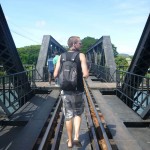 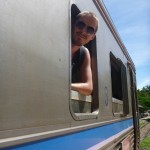 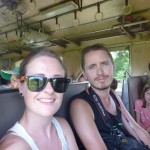 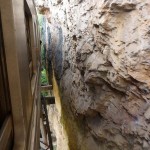 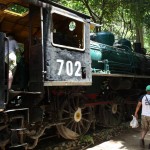 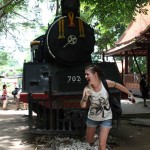 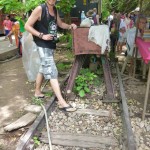 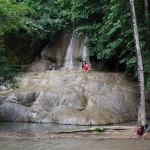 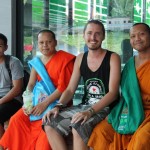 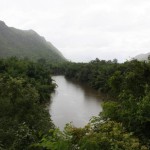 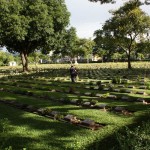 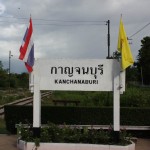 4 thoughts on “Back in Bangkok and the Burma railway”