We had so much fun in Chiang Mai, that I just had to split the post in two to save your poor eyes (and to stop my brother-in-law from getting another migraine from reading our blog. Sorry Kev). 🙂

So after our epic adventure the day before, we woke up early again ready for a full day cooking course. Yep no rest for the wicked. We were picked up in another open back van along with a young Canadian couple from Quebec. These guys were travelling South East Asia as a 3 week holiday and were really helpful with tips for the rest of our journey. Palma, the Canadian guy was pretty tall with big muscles and a head full of ginger hair. He was really pale with a thick beard and square jaw (the reason I’m painting a picture of him for you will become apparent in just a second). During their time in Thailand this poor chap has been admired by the locals for his skin and hair colour alone and called a lady boy several times! How weird! He was so manly, even if he wore high heels and sported a handbag he’d still be masculine. Anyway, turns out that it would just be the four of us in the cooking class today. 10 mins later we arrived at the cooking school and were greeted by our teacher, a young lady called New. This woman spoke incredible English and had a great sense of humour. She even called the Canadian guy ‘Mrs’ at one point, just to rub salt into his wounds. She made the whole day fun whilst being really informative about Thai ingredients, cooking methods and traditions.

We were first taken to the local food market, on the way picking leaves from local trees and smelling/eating them, realising it was kaffir lime or tamarind! The market itself was a huge eye opener, selling all sorts of ingredients – most I’d never heard of or seen fresh before as we can only get them dried in the UK. The colours were mesmerizing and the smells incredible. My stomach started to tell me it was hungry and I’d better start cooking soon. We returned to the school and choose the dishes we wanted to cook – one starter, an appetizer, a soup, a curry paste, a curry and a dessert. We chopped, scraped, pestle and mortared away, fried, boiled and ate our way through all our courses. It was all so yummy and my favourite thing I made was the coconut chicken soup. We went away with a certificate each and a recipe book with all the dishes inside. Family and friends back in the UK, just you wait! It’s gonna be yum yum time when we return and cook up a storm!

That night we celebrated our cooking success with few 6.5% Chiang beers and so woke the next morning with the legendary ‘Chiang-over’. A headache like you’ve never experienced before. Bloody good beer though, so good Andy now sports a shirt with the logo and elephants on the front (Chiang means elephant in Thai). This day was to be a chill out day and a good excuse to try out a traditional Thai massage, especially when it only costs £4 for an hour. We walked to one of the many spas dotted around town, slipped off our shoes (which is customary before entering any building in Thailand) and were greeted by women dressed in silk uniforms, smiling with their hands together and bowing. We sat down, had our feet soaked in hot water with lime and then had two women wash our feet with a mud scrub. We were then asked to change and were given a clean t-shirt each and traditional yoga pants. We followed the women into a dark room that smelt of lemongrass and was playing music I recognised from my old yoga classes (Jodie it was Bliss they were playing!). We laid down and the next 1 hour was a mixture of heaven and hell. I was massaged and rubbed with soothing menthol oil that I’d asked for to cool my collection of mosquito bites and then stretched, trodden on and contorted into positions I didn’t know my spine could make! Afterwards we could hardly stand up we were so heavy and relaxed. We floated out to the seating area, where we were given cold face towels and hot ginger tea. I feel asleep while I had a manicure and pedicure done, which both turned out ok but nothing like as good my sister does back home. 🙂

The next day we started our epic 3 day journey to Luang Prabang in Laos. We were picked up by a brand new Merc mini van with freezing cold air con and made friends with a young Australian couple on board. We were heading to Chiang Khong, a small Thai town opposite the Laos border with the giant Mekong river separating the two. It took around 6 hours to get there, stopping off at Chiang Rai’s famous white temple created by a wacky artist. It features the typical elements of a Buddhist Wat with the addition of a sculpture of Neo from the Matrix along with the Predator. I know, why oh why?! We have no idea, but the place was breathtaking nonetheless. When we arrived at the hostel – a set of wooden stilted bungalows on the Mekong river, we dropped off our bags, shared a few Changs with our new Aussie mates and turned in for the night, slightly nervous about the next two days spent on a slow boat.

I’ll let the hubby take the story from here … 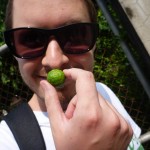 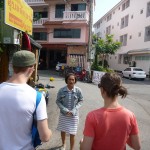 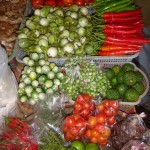 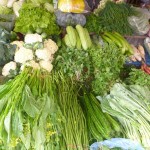 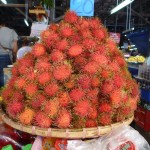 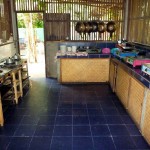 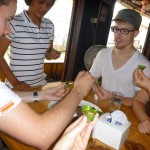 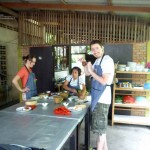 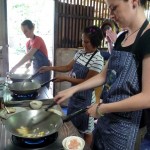 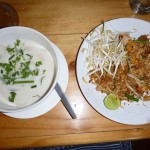 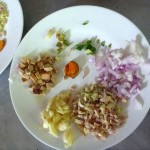 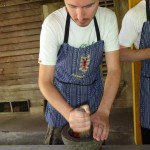 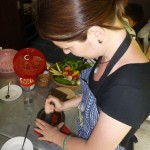 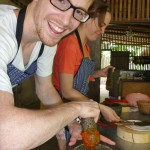 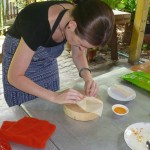 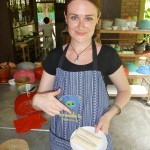 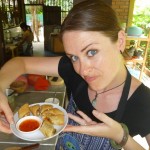 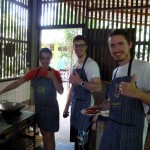 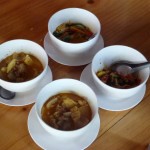 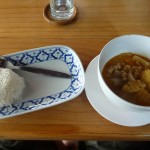 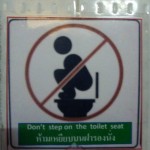 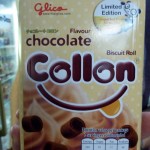 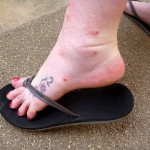 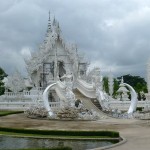 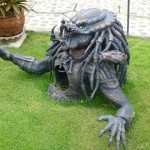 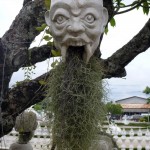 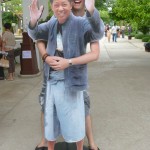 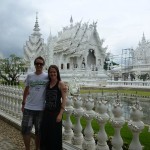 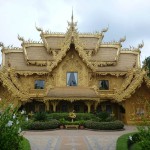 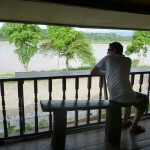