Hello everyone! Back again for another Bali blog are we? Well enjoy!

The morning we left Nusa Lembongan behind was also the day we said goodbye to our friends Kelly and Danny who were off on an adventure to the Gilli islands. We would see them again in a few days time in Ubud, but before then we had Seminyak to explore. The boat back to Sanur was smooth and quick with the sea being as calm as a lake. I still had the nightmare of Thailand’s boat experience in the back of my head, so was still pretty nervous. What a douche! Our transport was there waiting for us when we arrived back in the busy port, and it wasn’t long till we were in Seminyak, at our friends hotel.

While the others checked in, Andy and I started a search for accommodation that fitted our backpackers budget, and after a while found a nice little place with a pool just 5 mins down the high street. Seminyak was busy with tourists (mainly Australian) and full of shops for all budgets. Like a shopping haven, it sold anything from fake Ray Bans to real Tiffany jewellery. It was a cool place but a bit of a shock to us all after spending the past week on a beautiful island. It didn’t feel like Bali, you could have been anywhere in the world. We found a French cafe to have lunch in and all chipped in to try out an expensive Kopi Luwak coffee (famous as the bean is eaten by a weasel, shat out and then roasted! Gross!). And yes it tasted gross too, like burnt green weasel shit. Funny that! Look, I’ve eaten it in Vietnam so I do know 🙂 We got lost in the big Bintang supermarket in town, buying tons of gifts, keepsakes and Bintang vests as it was all so cheap. They sold packs of cigarettes in there for £2, weird body whitening products like deodorant (why oh why?!) and paintings of smiling pigs with melons on their heads. We were also laughing at all the wooden penises they sold in there. We’ve seen them before in markets but these were brilliant! Penis key rings (had to buy my friend Becky one of those – black with a beautiful painted flower on it), penis bottle openers and even penis wine racks! Wtf?! We did wander round some other shops in the high street but nothing compared to that funny supermarket.

The restaurants in Seminyak were pretty good, hardly any of them Balinese though. We sampled the Japanese restaurant first where Nic and Ian got to relive their love for Japanese cuisine since they visited the country a few years ago. We also loved the pizzas at a local posh Italian where we received a free mini starter each of garlic tomatoes on focaccia bread. Yum! Of course we didn’t spend all of our time in Seminyak eating and shopping, we did get up to some activities. On a couple of days we went to the beach and hired surf and body boards while Nicola (being pregnant) went to a local spa and got utterly pampered for a few hours instead. After trying my hardest to surf in the rough sea, I gave up and body boarded some pretty good waves. It was so much fun! I think I almost lost my voice because I was ‘whooping’ everyone who caught a wave, my face hurt from smiling and squinting because the sun and salt was blinding me and my body hated me for taking it out for a spin on the sea. I was knackard and felt like joining Nic for a massage!

On our last day we hired a car and driver to take us to the Uluwatu temple (near where we had been staying in the first week in Bali) to watch a traditional fire dance. En route we stopped in some discount surf outlets in Kuta that I thought were full of very expensive old surf crap or what looked like fake board shorts. I sat outside empty handed while Nicola stepped out the doors with bags in her hands. Of course she’d been able to find the only nice stuff in there and for a wicked price too. Jammy sod – aka bargain hunter/TK Max queen! We carried onto Padang Padang beach for a swift beverage before heading to Uluwatu temple for sun set.

The temple itself was slightly disappointing – tiny and behind closed gates swarming with pushing and shoving Japanese eager to get a better photo than you. We all queued to get into the arena where we were seated on stone steps and packed in like sardines. There was hardly any space left for the dancers in the middle and Nic scared me when she said ‘wtf would we do if a fire broke out?!’. True there wasn’t any exits or escape routes. So when they set the dancing dude dressed up as a white monkey on fire half way through the show, we could only look at each other in disbelief and laugh! It was a fantastic show – a love story with good conquering evil. Men chanted for the background music and set the scenes, women were dressed as characters from religious Hindu stories and men pranced about either as monkeys or evil characters. At the end we all got to have our photos taken next to the cast! The journey home was however horrendous, taking 3 hours as the traffic was so bad. You know it’s bad when you resort to playing the ‘what would you do for a million pounds?’ game. All I’m saying is I hope that driver couldn’t understand English too well, the filth Ian was coming up with! I mean, what won’t that boy do for a million? Only joking… Jem was worse 😉 Ha ha!

See you again soon for the last Bali blog on Ubud and another video! 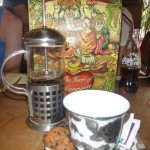 Yes Jack Sparrow was here too! Actually a really cool kite a beach hawker was selling.

Japanese meal out at Ryoshi

Jemma’s ‘wtf is it?’ face here 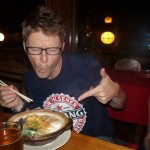 check it check it yea!

Andy couldn’t wait to get his chop sticks round this 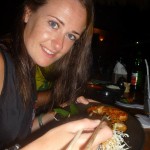 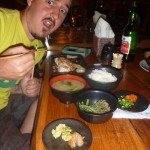 Who had the most dishes? 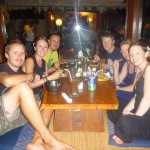 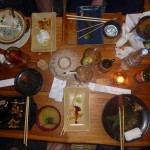 Jemma had a crumb in between her teeth 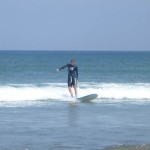 Andy giving it his best 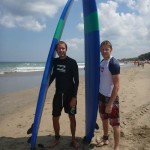 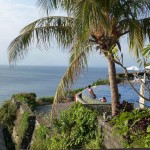 Nice pool with a view

We had a small drinky poo in this cool cafe 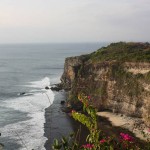 The temple on the cliff top

Where we would be watching the fire dance later 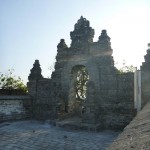 Got this pic in right before the Jap invasion :0) 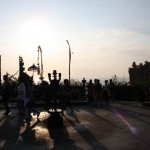 Waiting for the arena to fill up 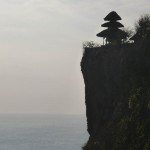 Don’t go near the edge! 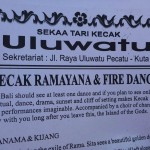 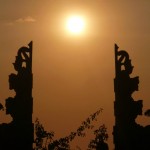 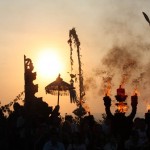 The fires were lit 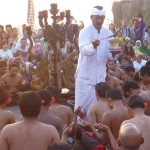 Fire dude then sprinkled everyone 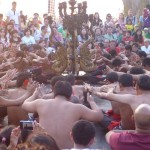 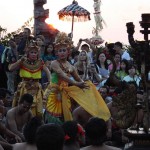 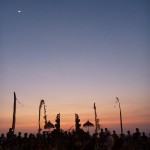 A rosey Jim, a sun burnt Andy and Ian, but not sure who the dude is on the front left? :0) 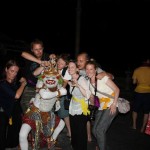 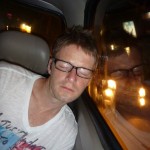 The ‘what would you do for a million pounds?’ game got the better of Ian and his filthy mind