Hey everyone, so we arrived in beautiful Luang Prabang, glad to be back on dry land after two days aboard the slow boat. Luang Prabang has two rivers flowing past it, the Mekong and the smaller Khan which empties into the Mekong, so it’s quite a beautiful setting. The town is famous for the daily alms ceremony where the locals line the streets at dawn holding food. The Buddhist monks from the many different Wats (temples) then walk in line past the people, receiving a small quantity of sticky rice from each in their bowl. This will be their food for the day, since monks cannot buy anything they need to be given their food. The monks will split this rice between their two daily meals, one at 7:00am and one at 11:00am, I don’t know how they manage, but it’s no surprise that they are all very slim guys. Both parties benefit from this ceremony, the monks get fed and the locals receive merit for their good deeds which will improve their prospects at reincarnation time. Sure enough this is a big hit with the tourists, so this along with the beautiful mix of colonial and traditional architecture and the beautiful setting make for something quite special.

Laotians are very modest and polite people and so the traditions and culture of western travellers can often be at odds with theirs. For example, when its hot we’ll tend to strip down to skimpier clothes to cool down, Laotians always cover their legs and shoulders and regard scantily clad westerners with disgust. So westerners have to be sensitive to their customs and it will be appreciated by the people. Unfortunately a party town to the south called Vang Vieng attracts a lot of the sort of travellers likely to ignore these customs, so you still see guys walking about with their shirts off.

After our time on the slow boat we’d made a lot of friends and so walking around Luang Prabang we would regularly bump into people we knew which was nice. One evening we met up at the Mojo bar with a group from our boat while one of the French travellers played guitar and sang on stage. We sat about drinking Beer Laos, which was too expensive at this place, until a fellow Brit shared a bottle of Lao Lao whiskey (it’s made from rice and tasted similar to rum I thought) with us all and so the evening became quite lively. The only problem was that Luang Prabang has an 11pm curfew which is enforced, luckily though by cramming the 9 of us into a tuk tuk we could go to the local bowling alley which stays open until the early hours. Apparently the head of police owns the place and so is willing to overlook the curfew. It’s situated out of town and so causes no nuisance to the locals. So we played a few games in this bowling alley that once inside you could have been anywhere in the world, Emma won a game, I was terrible as usual. A few more Beer Laos were drunk before we headed home.

Another day we visited the incredible Khoum Si waterfalls, it was a really beautiful spot yet incredibly slippery, I saw a few people land on their arses. We admired the many different pools before getting too hot and so went for a swim in one of the lower pools. The icy cold water was very refreshing and gave us an opportunity to try out our underwater camera for the first time it’s still working thankfully! We saw a small Sun Bear sanctuary, I think these might be the smallest bears in the world, or so the sanctuary claimed. All of their bears were rescued from the brutal bear bile industry so the poor creatures lives had improved drastically. The keepers had buried their food all over the enclosure and stuffed tubes of bamboo with food so the bears have to forage and have a more engaging life. As it was the start of rainy season, short afternoon downpours are common. Sure enough it started hammering down so we ran carefully back to the minibus, seeing a few more large ladies land on their backsides.

We were determined to witness the morning alms ceremony at some point in our stay and so got some information from the receptionist at our hostel about where and when it happened. Unfortunately her information was wrong by about half an hour (for once something happened in Laos earlier than scheduled) and so we missed it. All we saw was a line of monks in the distance heading back to their temple. Determined to see it still, we tried again the next day, getting up at 5:00am to be in town for 5:30. Sure enough locals were sat in a line on mats (you have to be lower than the standing monks) ready to give away their contribution. We stood back on the other side of the road trying to keep a respectful distance. Unfortunately a few minibuses had dropped off some tourists who were stood in the middle of the road with their huge cameras waiting to shove a lens in the monk’s faces as they received their food. Some locals tried to sell us food to give to the monks but we declined, since we aren’t Buddhist we decided we shouldn’t interfere with their religious ceremony but watch from a respectful distance. A few westerners had paid a guide to set them up with a mat and food so that they could join in. As the monks received the food from them, the guide took their picture. Unfortunately this ceremony is a big hit with tourists and so some locals are keen to exploit this market. Some tourist restaurants include basic etiquette rules in the menus hoping to educate tourists about how to witness the ceremony respectfully, we tried our best too, one place made the point that if tourists keep buying food to give to the monks then soon there would be more locals selling food than there were giving food to the monks. We were glad to have witnessed the ceremony, it’s a beautiful sight as the monks in their bright orange robes file past with their copper food bowls.

We hired some bikes another day and tried to see a bit more of town and headed a bit further afield. We crossed the Kham river over the bike bridge, a two way narrow bridge the width of one car, trying to keep our wheels on the narrow planks of wood laid out, a line of scooters building up behind us as we went. We managed to see some untouched rural life on the outskirts of town and as usual small children waved and shouted “sabaideeeeee” as we passed, that’s hello in Laos. We finished the day at our new favourite bar in the world called Utopia, it’s just got the edge on the Lewinnick Lodge in Newquay, Cornwall. Laying out on a woven mattress and bolster we lounged and drank ice cold home made lemonade, mixed fruit shakes and of course Beer Lao, the whole time overlooking the scenic Khan river with local fishermen casting out their nets. It was such a beautiful setting, in the evening fireflies whizzed about in the vegetation below.

One night we splurged on a posh meal at the Tamnak Laos restaurant. We tried some Mekong fish wrapped in banana leaves and steamed, it was incredible, the flavours here are very distinct from Thailand. We also ordered some bamboo shoots which had been stuffed with pork and vegetables and deep died, they were served with a sweet chilli dipping sauce. I had an iced “dog” tea, the dog refers to the picture on the tea packet apparently, again another taste like which I’d never experienced before, smokey, orangey and slightly sour. The night was going well until we had a few power cuts which I got the impression were fairly common and then a huge spider appeared on the ceiling above Emma’s head. Luckily we were just finishing so despite some moderate flapping from Emma we soon left.

We intended to head south from Luang Prabang towards the capital Vientiane. Lying halfway between is the notorious town Vang Vieng which I mentioned earlier, I’d recommend doing a google search yourself to see what comes up. We were torn whether to visit or not. Everywhere tells you it’s the town that sold its soul to the hedonistic tourists looking to get off their faces on opium tea, marijuana and to drink buckets of cheap and often free Lao Lao whiskey (literally, served in a bucket). This concoction combined with floating down the river in a tractor tyre inner tube often leads to a hospital admission, either on a trolley or in a body bag, we weren’t sure that we wanted to see that, yet fellow travellers had told us we HAD to see it, so we decided we would, and booked our seats on the minibus for the next day. 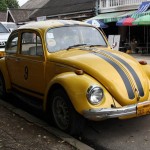 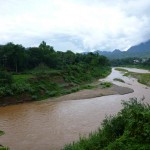 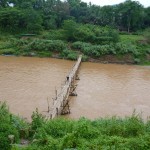 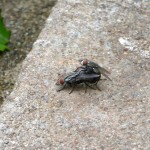 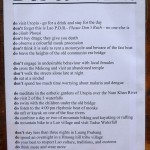 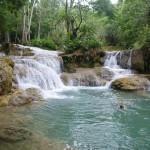 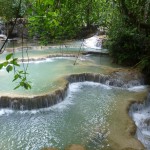 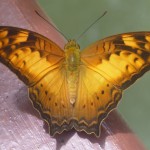 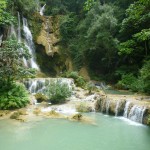 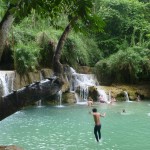 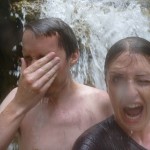 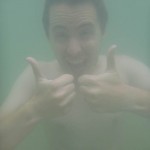 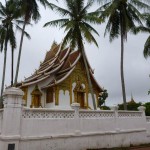 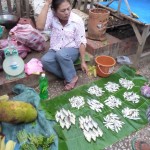 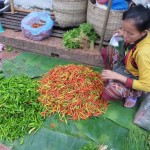 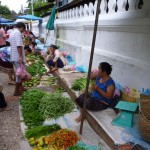 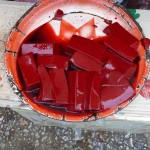 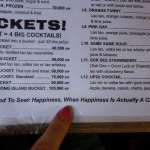 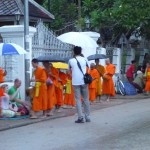 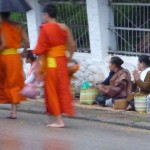 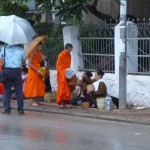 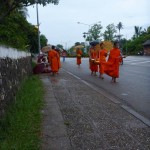