Kia Ora everyone! Our last post left you with us having attended a hangi feast at the Maori village of Tamaki, hmmmm yum yum…

Well, when we woke the next morning to our alarm going off at 6.30am, I don’t think our stomachs had finished processing the copious amounts of lamb, chicken and stuffing we’d feasted on the night before, since they were making the strangest noises I’ve ever heard. Either that or the thought of paddling down a 7 metre waterfall in 2 hours time was unnerving us slightly. We drove into a very quiet Rotorua town and found a good spot to leave the van for the morning. We were due to be picked up by our rafting company (Kaitiaki Adventures) in 5 mins time. Well, it was a good job they were running late as Andy had one of those moments when he had to find a public toilet and find one quickly. Ha ha!!! The tons of food he’d consumed at the hangi had certainly caught up with him, and it was a good job he’d sorted it out now and not on the descent down the giant waterfall on the Kaituna river!

After being picked up in a mini bus and taken to the Hells Gate area (another thermal spot full of bubbling hot pools and steaming eggy mud), we were soon in all our safety gear and signing our lives away on a consent form (a great way to get the pulse racing I can tell you!). We then boarded another van that took us to the Kaituna river where our rafts and guides were waiting. It was on this bus that a young Kiwi woman (one of the guides with rafting arms the size of Arnold Schwarzenegger’s) told us the do’s and don’ts of rafting. Most of the info was everything we’d learnt in Chiang Mai, Thailand, however it was the ‘how to survive a capsize under the 7 metre waterfall’ section of her advice that really caught my attention. This jokey, smiley Kiwi girl suddenly went very serious and explained how the pressure of the waterfall and swirling nature could potentially hold you under and drown you. SHIT THE BED! Now my heart was thumping and I felt the palms of my hands begin to sweat.

We arrived next to the great Kaituna (which literally means ‘food eel/fish’ in Maori, a plentiful source of food), were separated into groups and given a guide each. Ours was a guy called Raana and man was he cool! A classic funny and sarcastic Kiwi but with arms of steel like all the other guides. He also seemed to be like a chief to the others, calling everyone around him before we jumped in our rafts and proceeded to chant in Maori, asking the river for its blessing and to keep us safe. He did this as the river was a sacred place for the Maori, where they would commit the bodies of their dead. We listened and gazed into the deep emerald green water that looked thick and glassy. While his words echoed through the forest and gorge, I realised how beautiful this place was. I’d never seen anything like it before. I was deep breathing, my heart was pounding and I now couldn’t wait to get into that river and conquer the rapids and giant waterfall that lay ahead. Everyone looked as eager as I felt and when Raana shouted – ‘are you ready?’, we all replied ‘YEA!!!!!’ in a buzz of screams, shouts and applause.

Now we’ve done white water rafting before in the jungles of Thailand and canoed rapids in Laos, but looking back now I’ve realised how tame the waters and falls were. These were insane! For the next 45 mins we paddled, screamed, got screamed at by Raana, ducked, held on for our lives, screamed some more, swam in the warm water, surfed a few rapids and grinned like idiots the whole damn time. I’m writing this so I obviously survived the big 7 metre waterfall and I’m pleased to say we didn’t fall out or capsize like the other boats that day! Woo! What a rush! Check out the pics below and have a laugh looking at the expressions on mine and Andy’s faces. What loons! 🙂

For the rest of the day we were buzzing. That’s it, we caught the adrenaline bug and NEEDED MORE! We drove to Taupo and sat watching in disbelief at all the people chucking themselves off a platform over the Waikato river with a bit of elastic strapped to their feet. Yep, you’ve guessed it, we were going to do a bungy jump too! We got a super good deal at the iSite (info centre) in town that meant we’d receive a free DVD each of our jumps – something to show the grandchildren in the future, and booked our jumps for the next day. We sat sore and achy that night eating our dinner in a farm stay surrounded by clucking chickens, fuzzy knocked-kneed alpacas and Wilson the Kune Kune pig snuffling around our feet. The image of luzzing ourselves off a platform, 47 metres down the side of a cliff tomorrow kept popping into our heads. Arrrrrgghhh!!!! Was I going to chicken out or swan dive like Bond off the ledge?

After what could only be described as the coldest night I’ve ever experienced in my whole life, I needed a good stretch to warm up the body the next morning. I know what could remedy that – a bloody good bungy jump before lunchtime sir! So off to the Taupo bungy centre we went. We checked in, got weighed and was asked whether we wanted to be dunked in the river below or not (turns out they can’t guarantee a submersion but they’ll love to try!). Andy replied ‘dunk me’ whilst I said I didn’t mind and to surprise me. We walked out onto the long ledge perched on the side of the cliff face, swaying in the breeze which was scary enough. They put a harness on us (yes you are attached to the rubber bungy rope by your body too if something fails with the attachment around your ankles), and I opted to go first, leaving poor Andy to watch me fall and wait longer ha ha!!! Sorry darling 🙂 I shuffled over to the edge of the swaying platform, aware of the pulling rope at my feet like a big weight. I looked up at the camera and faked a smile (coz I was bricking it in my pants!!!), and the guide told me to lift my arms up and fall forward, not jump. I looked down at my feet and over my toes saw the river below with two guys waiting in a boat for me at the other end, looking tiny as they were so far away. I looked up at the horizon, took a deep breath and said ‘sod it, let’s go’ in my head.

The next few seconds where incredible. Free fall is incredible and the volume of my screaming was also incredible. If you know me, then you can only imagine what my screaming sounded like cocooned by cliff sides ha ha! I nearly touched the water I was so close! The bouncing after was like flying, I was flapping my arms as if they were wings and I didn’t want it to stop. I soon realised the men in the boat were lowering me down into their dinghy and removing the rope from my feet. Oh yea, Andy was above me waiting to experience the same thing, I totally forgot! The boat dropped me off by the side of the river, while I stood buzzing my nut off, waiting for Andy’s turn. Suddenly I was nervous again, at this angle the drop and whole set up seemed crazy. Andy walked to the edge, raised his arms and fell, shouting ‘ssssssshiiiiiiit’ and other obscenities the whole way down. Before I knew it he had completely disappeared under the water, just his feet remained above the river, and he emerged gasping and laughing. ‘Wooooooo yea!!!!’ he kept saying. And that was it. We’d both done it and experienced it in very different ways. DO IT! You know you want to hee hee 🙂

We drove round lake Taupo laughing and chatting away about our last two crazy days. We were heading to a campsite near the base camp of the Tongariro Alpine Crossing. Yep, tomorrow we would climb an active volcano, you know, as you do. 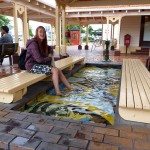 Warming the feet up in a hot spring, loooooovely 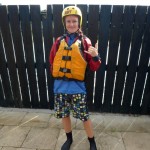 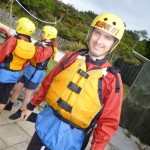 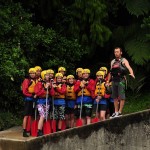 Raana asking the river for its blessing and safe passage

Our first fall/rapids getting warmed up for the biggy later 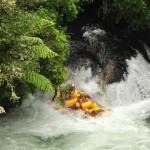 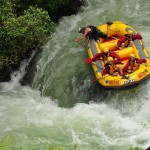 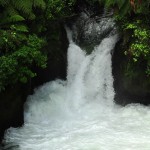 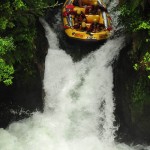 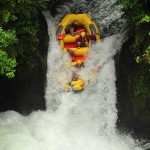 By the beard of Zeus! 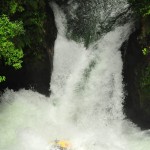 Our boat was a bit empty but we rocked! 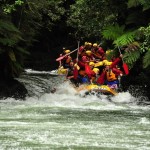 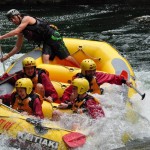 Getting dunked head first into a waterfall 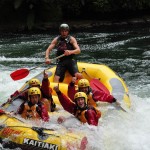 In we go again 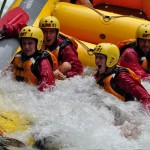 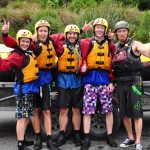 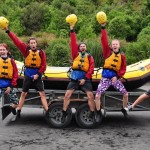 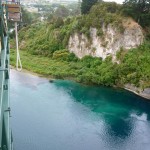 This is the river you jump over/into. So beautiful! 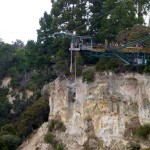 Watching someone DO IT! That will be me tomorrow eeeek” 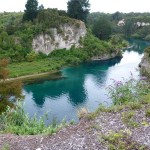 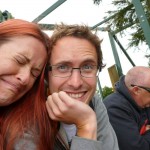 Thats it, we are all booked for tomorrow. Bungy jump here we come. Shhhhhhit! 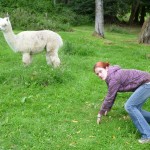 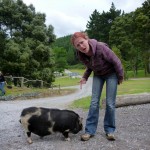 Chickens and all sorts living here 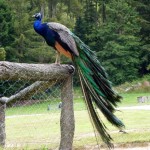 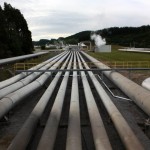 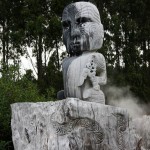 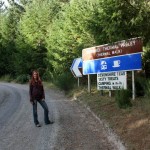 Walking back to our farmstay 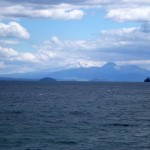 Nice view of Mt Tongariro and Ngauruhoe behind it. Climbing those tomorrow! 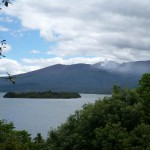