You are here: Home » All Posts » Countries » Backpacking China » Beijing – Jingshan Park and the Forbidden City

Ok, so I wrote this blog whilst pretty drunk last night on my third litre of draft Chinese beer, listening to Limp Bizkit in our first hostel in Beijing – The Happy Dragon Hostel (my first and favourite hostel EVER!!!!!!) So far our trip to this county has been ace! The people are super friendly, helping us on the metro with our tickets etc, whilst we were wearing stupidly massive backpacks. The flight was good, although me and Andy are very ill with the worst colds of our lives and me with pink eye (cheers to whoever farted on my pillow!). Me and Andy have limited supplies of tissue to blow chunks of our bloody noses into, however after a few days here, we will probably act like the Chinese – hack it and whack it up on the street.

Beijing is full of tourists like us and Chinese alike. Aside from us, there are the very rich and the extremely poor (going round the city collecting plastic bottles to sell on for their earnings). However,  its so clean and beautiful here, not what i was expecting at all (especially after our recent city break to Pairs where I saw a tramp shitting in the street!).

Within our first two days, we have roamed the hutongs of Beijing, seen the farmers markets (saw f**king moving scorpions on sticks!!!), hiked the amazing hill of Jingshan mountain (with views of the City) and visited Tiananmen Square and the Forbidden City. OMG that was amazing and I’m totally blown away by their past and culture. The gardens were particularly beautiful, my favourite part of the Forbidden City.

A lot of people stare at us, probably our massive Roman noses had something to do with that. Andy got a picture taken by some random Chinese dude in the garden of the Forbidden City. Probably thought he was Christian Bale with his new shaved cylindrical lid ha ha! Anyway, its nice to know we can now update you all via our blog/Facebook. More from us and our adventure on the Great Wall soon … 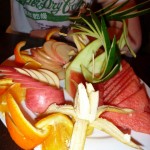 Our first meal on arrival in the Happy Dragon Hostel in Beijing. 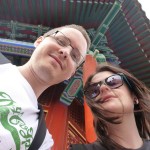 Us two outside a pagoda in Jingshan Park, Beijing 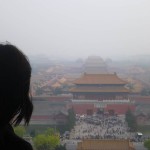 The view of the Forbidden City from Beijing’s Jingshan Park. Pretty smoggy eh! 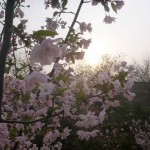 Loved the pinks in the blossom we saw. Spring was the right time to visit China! 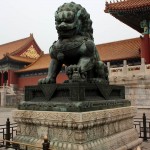 One of many lion statues dotted around the forbidden city

Many steps and many buildings, all so beautiful! 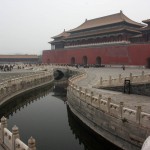 the magnificent doorway into the Forbidden City, Beijing, China 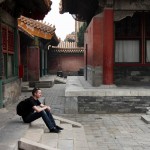 Taking a second to chill out surrounded by the amazing architecture of the Forbidden City, Beijing, China 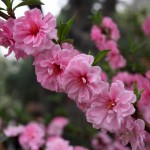 i don’t know what it is, but it smiles anyway 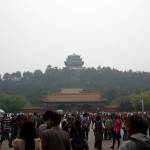 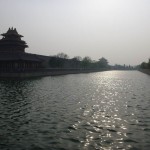 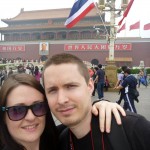 Here’s the entrance to the Forbidden City with Chairman Mao and us two! 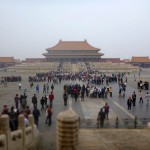 3 thoughts on “Beijing – Jingshan Park and the Forbidden City”