You are here: Home » All Posts » Countries » Backpacking China » The Great Wall and Scorpions for dinner

Hi everyone, I’m sat writing this sipping from a bottle of Jan Jing beer after having just enjoyed a bargain lunch. We decided to raid the local supermarket for food today rather than eat out as we had an expensive day yesterday visiting the great wall. All in all after buying two 500ml bottles of Jan Jing beer, two massive beefy pot noodles, two soft drinks, two packs of snacks, a massive multi pack of chocolate buns (there must be about 20 in there), a humongous multi pack of tissues, two pairs of chopsticks, shampoo and toothpaste the bill came to 58 Yuan, that’s about £5.80! The beers alone were only 28p each 🙂

Anyway back to the great wall, we visited the Mutianyu section about 3 hours drive north of Beijing. It turned out that most of the wall here had been rebuilt in the ’70’s but there was a section at one end that was untouched since its last restoration 700 years ago. We managed to reach this part and it was worth the trek, you could see the ruins extending off into the distance along the ridge of the mountains, truly quite beautiful. I wasn’t prepared for quite how steep some of the sections would be, luckily it was cool and misty yet I was still sweating like a sweaty pig. The best part of the trip though had to be the toboggan ride back down to the bottom, you had a good 5 minute run down the side of the mountain and you could get quite a speed up.

In the evening we visited the Donghuamen night market which is a long strip of food stalls selling everything from banana fritters to grilled starfish. We strolled the length of the market grazing as we went, starting off with some safe fried dumplings, then grilled calamari (which was pretty vile, I normally like the stuff but I think this had been cooked for about 3 days too long, I couldn’t finish it so we tried to give it to a tramp, he didn’t seem that interested in it either), we then stepped things up and bought some skewered grilled scorpions. I can safely say I’d rather eat scorpion any day than have to try and eat any of that calamari again. It was crunchy and the flavour wasn’t offensive, quite a meaty taste. We finished up with a fruit skewer, all covered in sugar like a toffee apple, a nice way to finish the night.

Strolling around Beijing you’re constantly hit by different aromas, one minute it will be the smell of loose tea, then it’s grilled spicy lamb and then whack, you’re hit by this tangy unpleasant whiff which I suspect is chou doufo, literally smelly tofu. I don’t know what’s involved in making the tofu smelly but I’m happy to avoid it.

It’s hammering it down with rain now so it looks like we’ll be staying in for the night, hopefully we might see the sky tomorrow for the first time since we’ve arrived if the rain can clear some of the smog.

So it’s Zai Jian from me, will be back soon. 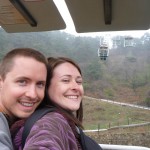 Taking the chairlift up to the Great Wall. 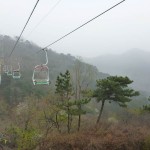 It was so quite going up, really beautiful. 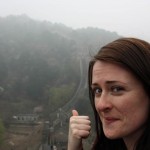 The view at the top.

There were lot’s of steps and some crazily steep. 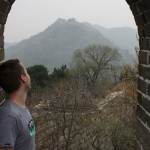 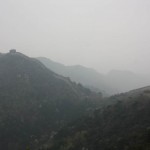 The Wall extending into the distance. 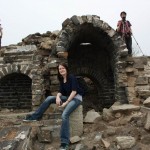 Emma sat at one of the unrestored sections. 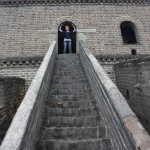 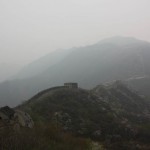 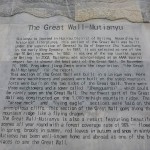 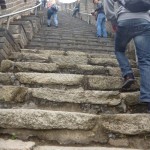 My legs hurt, even more steps. 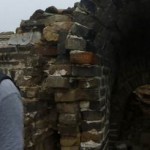 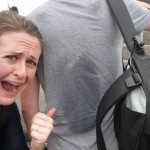 On a cool day I was sweating like a sweaty pig. 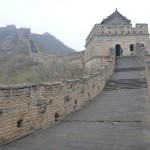 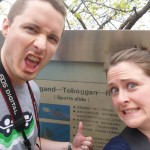 Queuing for the toboggan back down to the bottom. 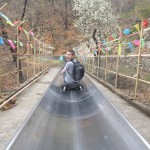 On the way down, this was so much fun! 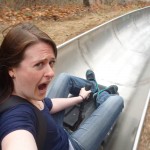 Emma loving the ride down. 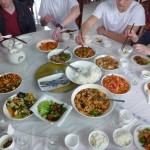 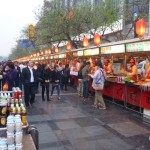 I wonder if I’ll be able to get a nice burger here? 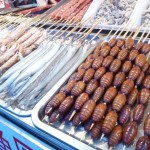 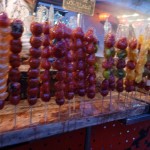 These were actually really nice, fruit dipped in toffee. 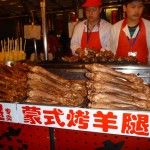 What did that come from? 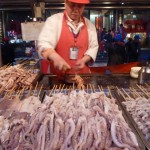 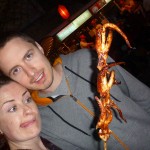 BBQ squid, that should be nice, it wasn’t though! 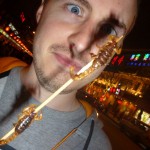 Crispy scorpion on a stick, looks horrid, was actually quite nice. 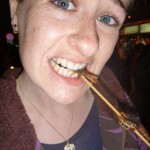 9 thoughts on “The Great Wall and Scorpions for dinner”