Some stuff you can’t make up, why is it that on our travel days we seem to attract the weirdos? Well our sleeper bus journey is another that we won’t be forgetting too soon. This is a pretty nasty post about an unpleasant situation so I’d like to warn you not to read on if you’re easily offended. I’m letting out some bile here so the language gets colourful too.

We arrived at Guilin bus station and went through the usual routine of locating the correct bus from the tens of buses parked up. Since it’s an overnight ride we’re looking out for a sleeper bus too, fitted out with bunk beds so that you can lay down. We couldn’t find our bus and so show our tickets to one of the many people hanging about by the entrance who seem to work there. We’re led deeper and deeper into the coach park trying to keep up with the guy who now has our tickets whilst he weaves between the parked up buses, following his occasional shouts of ‘hello, hello’. We arrive at a gleaming spaceship of a coach, lit with blue and purple lights, it was much taller than usual coaches, since it had two levels of bunk beds we thought. We crammed our backpacks into the luggage compartment and made our way aboard. We were looking for beds 4 & 5, but there were no beds only standard coach seats and our two were taken. The guy we’d followed points to two empty seats right at the front, I tell him he’s mistaken, we should have beds and that this is the wrong bus. No, this is the right bus he replies. We’re a bit startled at this and immediately quite annoyed, this isn’t what we paid for. The aisle down the middle is packed full with luggage which we have to climb over to get to our two crappy seats.

Sure enough the bus leaves at 8:00pm, when it should, but we’re uneasy that someone might have dragged us onto a private bus and might try to extort money from us at some point. You have to put your trust in someone but can’t help but doubt whether this is correct, especially when you can’t read or speak Mandarin. We check our lonely planet guidebook and sure enough we paid about £6 less than a sleeper bus ticket, so we were booked on the normal bus. We put our concerns to the back of our minds and started cursing the current situation instead. “This is shit!”, “we won’t get any sleep!” and “I think I need a wee, do you think the bus will stop at any point?”.

The bus pulls away and we quickly realise what we’re in for. Of course this bus driver is just as crazy as every other bus driver we’ve encountered in China, he overtakes at any opportunity no matter how close you are to the oncoming traffic. It’s going to be a long rough ride full of the usual scares. Coach drivers in China are incredibly good bad drivers, they can park their buses in spaces you can’t even see but they will drive like a maniac.

So several hours pass driving through small roads that are becoming increasingly worse, the pot holes are so bad that at times the bus is crawling along to avoid a puncture. We didn’t feel the slightest bit tired since we were concentrating on the next crazy manoeuvre the driver would pull off. Just to paint the picture there are electric scooters everywhere, all with their lights off so as to prolong their battery life, cars are undertaking us and huge fuel tankers cruise along on the wrong side of the road for no apparent reason.

Two young guys are sat across the aisle from us, they must both be in their early twenties wearing trendy clothes with funky haircuts. They’re polishing off a pile of sunflower seeds, breaking apart the husk and extracting the centre in one quick movement. They seem ok, they leave us alone, occasionally their friend joins them from further back on the bus and sits on the stack of luggage between our seats for a bit. Fair enough we think, no problem.

We’re now in the early hours of the morning after a couple of rest stops. On several occasions one of the three drivers climbs up the stairs to the seating level and shouts something in Mandarin, a passenger shouts back. They appear to be arguing but over what, we’re unsure.

We’re now driving through a huge city where another section of road runs above us supported by huge pillars that lie between the four lanes on our side of the road. The coach darts either side of these pillars regularly for no apparent reason. It’s pretty tight and we’re cutting up and being cut up by other traffic as we do so. Now the bus starts pulling over every few minutes whilst one of the drivers runs off apparently asking for directions, great we’re lost! We stop again at about 4:00am and the majority of the passengers get off, all girls in their early twenties. They spend thirty minutes taking more luggage than you’ve ever seen off the bus. The reason the bus is so tall is the huge amount of space beneath the seats in the luggage compartments. Every girl has several of her own huge boxes and bags that must hold duvets. We assume they’re students returning to University.

The bus is now largely empty, one of the lads next to us moves further back on the bus to sit with his mate. We’re left with the other guy next to us who is now working his way through various breads and some odd pot of liquid that he’s loudly slurping up. Emma’s now seething, she hates it when people eat with their mouths open or when they eat loudly. She puts on her headphones and listens to some music to block him out. Once he’s finished eating he puts his chair back presumably so he can now sleep.

Emma tells me that she thinks he’s been staring at her and that his hands are down his trousers. I immediately look at him as he appears to remove his hands from his trousers and sits back in the chair. I definitely saw him do that but am willing to overlook it, he was probably rearranging things down there as it’s a long cramped journey. Emma and I now swap seats just to be safe (I’m now sat across the aisle from him) and try to clear our minds so that we can consider getting some sleep.

I get another nudge from Emma. I look at this kid who is sat across the aisle from me and he has his hand down his pants and is pulling himself to pieces. What the fuck! I could not believe what I was seeing, he’s making no effort to conceal what he’s up to either, I’m so angry and disgusted. I whack him across the chest and point at what he’s doing and in no uncertain terms let him know what I think of him. He removes his hand from his pants and looks away like a child who has been told off. I don’t know what to do at this point, should I punch him? Should I try to tell one of the drivers? I don’t know where the hell we are and wonder if my actions would get us chucked off the bus. Looking back I wish I had hit him, he needs to learn a serious lesson. Surely someone who masturbates openly on a public bus is only going to go on the behave more depraved in the future?

We grab our day bags and head to the back of the bus as far away from that scumbag as possible. He’s probably resumed his session now that we’re gone. All I can think is that when we get to Shenzhen I will seriously hurt him if he comes anywhere near either of us or any of our stuff. Luckily he gets off soon after with his two mates so I don’t have deal with that situation, he doesn’t have any luggage either. I’d had daydreams of him taking one of our backpacks out of the luggage compartment under the coach and me running down to punch him for touching our stuff with his dirty hands. Scum bag!

The journey was plain sailing from there on luckily enough. We arrived in Shenzhen at 7:00am and after a frantic hour trying to find our hostel we checked in and showered. Shenzhen lies opposite Hong Kong on the mainland of China, we have one night here. Tomorrow morning we’ll leave China crossing the border to spend a few days in Hong Kong.

Shenzhen is China’s richest city and has Special Economic Zone status. This place is smart, huge high-rise buildings everywhere yet loads of trees and plants. Despite our bad moods we felt a buzz in this city, maybe it’s because we occasionally glimpsed Hong Kong when there was a gap in the buildings.

That evening we met up with one of Emma’s old clients, a product designer/marketer called Michael Liu. We sat outside a bar in the lovely warm nighttime air drinking Qingdao beer and munching pop corn. We told him about our journey and he asked us questions about our experiences, like how we got on with squat toilets! It was a great night and completely blew the previous night out of our minds. It reminded us that the people of China are lovely, kind and generous. It also made us realise how much we would miss this place.

Michael escorted us back to our hotel as is customary with guests in China. He gave us a pack of Almond biscuits, I’ve just eaten some now, typical of Guangdong province. What a lovely guy we thought as we took the lift back to our room. We went to bed nervous and excited about crossing the border to Hong Kong the next day. Surely it can’t be that different to China I wondered? 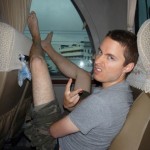 Couldn’t wait to get off the bus after the incident. 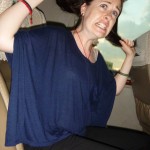 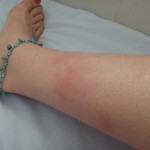 Emma’s gnat bites on her leg. 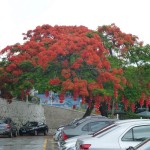 A nice tree in Shenzhen. 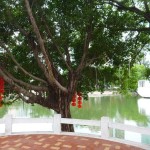 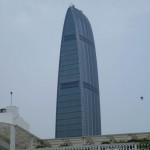 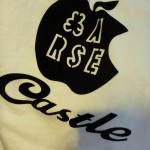 Some interesting Chingrish we found on a t-shirt. 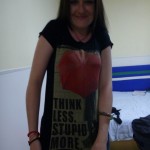 We’re not really sure what this means but we liked it. 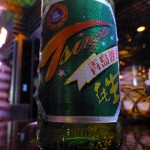 Tsingtao beer, once Qingdao before they changed the spelling for Westerners. 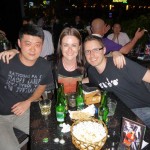 Us two with Michael, what a cool guy, we had an awesome night.