Our last day in Chengdu was a chilled one spent blogging, organising photos and Skyping. Unfortunately when I skyped my mum, we couldn’t hear her, so we had to lip read and rely on her super fast typing to have a chat. Was lovely to see you though mum 🙂

Afterwards we strolled downtown to the People’s Park where everyone goes to walk, run, dance, play badminton, sing karaoke and row boats on the tiny lake. As soon as we walked through the park’s gates, we couldn’t hear ourselves think, it was so loud! Holly Valance’s ‘Kiss Kiss’ song booming out from the right for the people learning how to salsa, some old dude warbling a traditional Chinese tune from the left and people all around us either clapping their hands or chatting away with friends and family. I loved it! It was truly mental but everyone was in high spirits and having the best time. Andy and I danced to a live band whilst walking round one of the many tea house gardens in there and had a permanent smile on our faces.

In one of the squares, a brightly dressed man with half his teeth missing approached us with some chalk in his hand. He couldn’t speak English but could write it, so he began to scribble on the pavement that he was in the war against the Nazis (yep he was drawing tanks, guns and massive Swasticker symbols by our feet! Awkward!). We couldn’t figure out what war he meant as he described to us that he fought against the Japs too and maybe the Russians? God knows, all I knew was that we had a massive crowd around us now, I had a nervous sweat on and the toothless man was getting more and more animated. Suddenly, a young cross-eyed, overweight boy walked into the circle of people around us and started to Egyptian belly dance towards Andy. The toothless man started to laugh and wrote ‘IDIOT’ in chalk, pointing at the boy. That was our cue to leave, so we did…swiftly!

We spent the evening back at the hostel drinking beer and chatting to a lovely Canadian couple who are almost doing the same route round the world as us. We hope to see them again in Yangshuo in a couple of days time and even in Bali in August! It was obvious after talking with them that we had over packed for this trip. Actually after speaking with most people we’ve met so far we’ve realised that we have taken way too much with us. So that night I threw more clothing and underwear away, so now I only have 7 knickers instead of 14. My bag felt lighter already 🙂

Off to Chongqing tomorrow on a bullet train, first class no less! Will miss Chengdu, I like it here. Who knows what lies ahead… 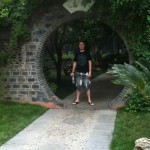 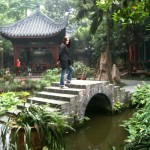 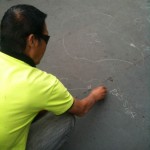