Hello everyone. We’ve just got back from an amazing trip to Jiuzhaigou national park, the most incredible landscapes I’ve ever seen. New Zealand, the bar has now been set so you’d better not let me down!

It’s a ten-hour bus journey to get there which flew past thanks to the stunning scenery. Heading north from Chengdu, you drive up through a dramatic river valley climbing higher and higher passing through small Tibetan towns as you go. Men and woman in bright traditional dress work on their fields, oranges are growing everywhere, you feel a long way away from the city now. Despite still being in Sichuan province many Tibetans live in the higher reaches, as with many borders, the Tibetan border doesn’t encompass all of its people.

The huge cliff faces on either side loom over you and in many places you can see where they have slipped, crushing large sections of road, the bonnet of a car was just visible from under one of the huge landslides. We passed old bridges that had collapsed and were struggling to stay put as the river gushed past. We later found out that we were driving through the epicentre of the 2008 Sichuan earthquake which had claimed some 68,000 lives, we were viewing the aftermath. The government has invested heavily in the area, rebuilding villages in Tibetan style to help the people make a new start. You can’t help but worry how safe they will be if it happens again.

After a brief flurry of snow which had the Chinese tourists on the bus very excited, we finally reached Jiuzhaigou. Jiuzhaigou literally translates as 9 village valley, referring to the 9 Tibetan villages within the park. By the time we arrived I was in a bad place, either the constant ascending and descending had caused some issues or the dried fruit I ate on one of the rest stops hadn’t agreed with me! I barged my way off the bus through the crowds of locals offering us rooms for the night. I did my business in the squat toilet and emerged relieved and dazed, I’d been hanging on for about 2 hours and my legs had gone numb where I was straining so much to hold it in! While we’re on the subject, Emma would also like me to mention the ‘trough’ toilets she had the pleasure of using on one of  the breaks. Apparently a long trough runs the length of the bathroom and the ladies stand with a leg either side doing their business, whatever their business may be. The issue lies with the fact that where there is no cubicle or division of any sort, you have a first class view of the lady in front, again whatever she may be doing. Similarly the lady behind is getting an eyeful too.

We checked into our expensive, grotty hostel which had never been cleaned and went to bed as we had an early start the next day. We got to the park gates for just after 7:00am and took a shuttle bus up the top of the west branch of the park. This place is absolutely stunning and definitely worth a visit should you ever find yourself in China. You walk down the valley following a river which feeds through many lakes and waterfalls on its way. Due to the large amount of calcium in the water, the lakes have the most incredibly vivid blue colouration. A wooden planked path leads your way down taking you through the middle of some of the waterfalls, so you get some amazing views. The waterfalls here are actually growing due to the calcium being deposited on the rocks. In the lakes, tree trunks and fallen branches are eerily becoming encased in the mineral deposits.

We were really lucky to be completely on our own for large sections of the day. We felt at times we were the only people in the valley. The bird life here is incredible and you can get quite close to them. I heard one outside our room that morning that sounded like the Velociraptors from Jurassic Park, I’ve no idea what it was (I’ve just been reading about the park on Wikipedia and apparently snub-nosed monkeys live there, I’m sure it was a group of these).

Anyway we walked our arses off all day until the park closed at 6pm. Take a look at the pictures to get the gist of this place.

We got the bus back to Chengdu yesterday just in time to join the hostel’s dumpling party, most hostels in China put on these nights but we’ve missed them every time due to train journeys. You’re given a big lump of dough which you’re taught how to knead, fill and seal. 20 minutes later you’re presented with your delicious cooked dumplings along with some fiery red Sichuanese dipping sauce, yum! It’s a free meal and also a great way to meet fellow travellers. One Swedish guy at the party was using 3 weeks holiday from work to travel up from Laos into China and eventually to Beijing, just him and his bike, very cool I thought. We also met a lovely Canadian couple on a similar route to us, by the sounds of it we might bump into each other again on our journeys hopefully.

That’s it for today, we’re off to the People’s park to drink copious quantities of tea and repeatedly tell smiling old Chinese gentlemen that we don’t need our ears cleaning. 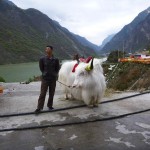 A guy with a yak we passed on the bus trip to the national park. 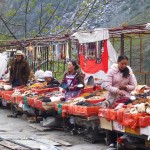 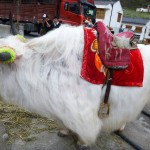 Us two on one of the rest stops.

The river followed most of the way there. 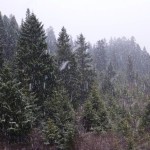 It started snowing on the way there. 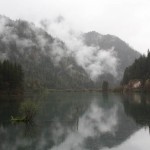 The views were incredible.

Despite the rain I’d say we both look pretty happy. 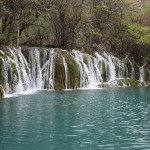 One of many waterfalls. 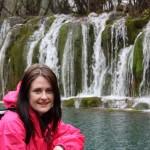 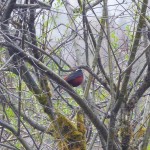 A nice bird we spotted. 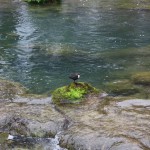 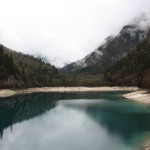 It lived up to our expectations, in face it bless them away. 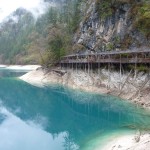 Is that water blue enough for you? 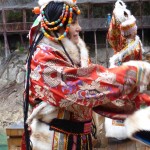 A lady posing for a picture in a traditional costume she just hired. 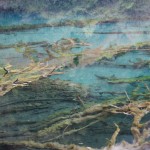 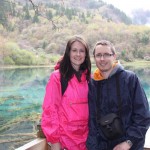 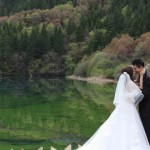 Not a bad spot to have your wedding pictures taken. 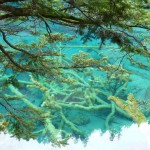 There are small fish in the lakes here.

Reflections of one of the bridges. 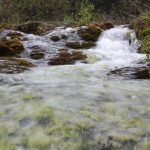 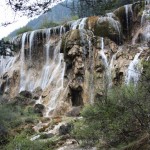 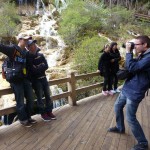 I don’t think they liked the picture I took! 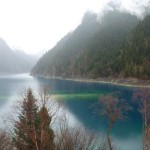 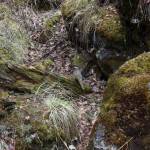 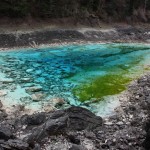 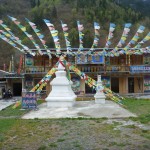 A Tibetan village within the park. 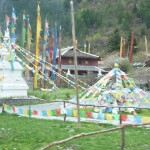 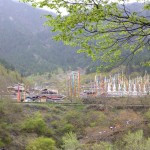 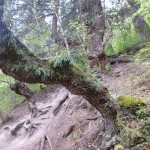 A bridge destroyed by the 2008 Sichuan earthquake. 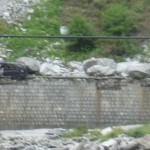 A car under boulders from the Sichuan earthquake. 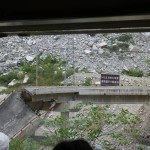 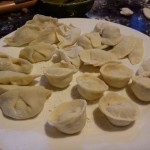 Our best efforts at making dumplings before they were cooked. 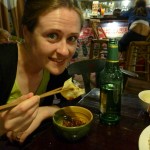 The rest of the group at the dumpling party.