You are here: Home » All Posts » Countries » Vietnam » Ninh Binh

Howdy! Hope you are all well and enjoying the fine weather at the moment (if you are in the UK). Ha ha, oh I am so evil 🙂

Lots of sun is overrated anyway, especially when you are burnt to a crisp like Andy and I were after Halong Bay. I’m rocking the ‘Tango’ look at the mo. The ‘Only Way is Essex’ has nothing on me!

So we said our goodbyes to Hanoi around 5am, stepped over all the sleeping staff on the floor when leaving our hostel and caught a two and a half hour train to Ninh Binh (heading south). The station was in full swing even at this early hour, it was chaos. No signs, no staff, just tons of people rushing around with heavy loads, screaming kids and shouting food vendors. We worked out we needed to get to platform 4, which meant we had to cross 3 lines of track by foot, all steaming in the heat of the early morning sun with toilet juice dripping from the undercarriage of passing trains. Nice. We boarded the train, was deafened by the loudest music known to man playing over the speakers and sat down for the journey ahead. We both wrote some blogs for the website (lucky you!) and arrived in Ninh Binh in no time. It was only a short walk to our hostel, but with heavy backpacks on and bubbling burnt red skin, the sun was not on our side. In fact, I’ve never felt heat like it. I cradled my arms to protect them from the rays. It was obvious from when we arrived that this was not a tourist town, the streets were quiet, the shop signs were not in English and it felt real, which was great. Just like our fake 2009 Lonely Planet book had said. We passed two women who were sat on their doorstep carving pineapple, Andy smiled at them and said aloud ‘xin chao’ (pronounced ‘sin djow’, which means hello) and they repeated it back. A few meters down the road we suddenly heard one of the women shout out to us – ‘a fuck a-you!’. Ha ha! Brilliant! Andy got verbal abuse from a Vietnamese middle-aged lady. From then on, he waited for locals to smile or speak to him first before interacting 🙂

We checked into our guesthouse and instead of chilling out and staying out of the scorching sun, we hired a moped and headed out to the rice fields in search of a place called Tam Coc. It was a knackered old geared bike but pretty powerful. Andy had never sat on one before, let alone driven one with a passenger on the back so when he first test drove it and nearly killed himself by rolling the accelerator instead of braking, I became designated driver. Thanks to my Dad I had randomly driven a moped before, up and down our old garden when I was 11 and also owned a mini scrambler bike when I was 16, so after 5 mins it all came back to me and we were speeding down a dual carriageway with Andy on the back and me sweating nervously on the front.

Tam Coc had lots to offer, what we didn’t do was the boat trip down the river or climb to the caves inside the steep hill sides since it was too hot. What we did visit were the ancient Chinese guesthouses and a temple in the middle of rice fields – just about manageable in the heat. After turning my usual berry red in the face, I ended up buying a traditional Vietnamese conical hat to add more comedy to the situation. Have fun laughing at me in the photos, I looked like a total nob! We saw rice being dried out on the ground, locals sleeping in hammocks tired from an early morning start and boats drifting past on the river with red tourists inside being hassled to buy silk from their drivers. So pleased we weren’t stuck on one of those for two hours, I would have died! The Chinese guesthouses were so beautiful, probably more original than anything I’d seen back in China and the temple was old and serene. We met a man inside who was the guardian of the temple, who spoke to us in French (a past colonial language of Vietnam). Turned out his name was Tim and he actually looked a lot like Ho Chi Minh (a man highly revered in Vietnam, especially in the North where the people conquered the south, kicked the Americans out and made the country communist). His picture is everywhere just like Chairman Mao’s was in China.

The drive home was slightly more stressful since it was rush hour, I was hot and bothered, and the rules on the road were nothing like back at home. Basically there is only one rule on the roads in Vietnam – keep going! People pull out onto roads straight in front of you without checking first or indicating. They rarely stop at red lights or use their brakes, they just keep going. Like the Chinese in a queue for the toilet, everyone pushes in and fills any last space possible, ’til it’s a sea of bikes all beeping crazily at one another. I was so pleased to get back in one piece that evening and was dying for a beer. We wandered the streets later that night in search of Bia Hoi (fresh beer) but didn’t find any, most streets were dark and people had shut up shop early. However, all the young children who lived down the street where we were staying came running out when we passed shouting happily ‘hello, how are you?’, ‘my name is …..’ and ‘good morning teacher’. They were so tiny and beautiful, and were so happy when we answered, it made the evening.

The next two days were spent looking round town at food markets selling all sorts (including hacked up dog and cat). We finally found a Bia Hoi stall run by a scary looking man with the classic long finger nail (not sure why men have this on their little finger, but its super long and white, and I’ve seen it all round China and South East Asia. Creeeeeeeepy! Can’t just be for picking your nose!). We also gave a lovely local lady a two hour English lesson to help her get a better paid job, so she can spend more time with her family. Basically she works all hours of the day at the moment in a hotel in Ninh Binh, her husband (who she never gets to see) is working his ass off as a taxi driver in Hanoi while her mother brings up their 2 yr old daughter in a village far away. All this and she’s only 22! The more I see how other people live in the world, the more I realise how lucky I am.

We had fun in Ninh Binh, but in hindsight, 3 days was far too long. The sea was calling me and so on the afternoon of our third day, with our huge backpacks on, Andy and I received a complementary lift to the station on the back of two young girl’s mopeds from the hostel. It was so funny, we were all over the place because of our heavy loads, my driver couldn’t stop laughing. We stepped onto a sleeper train and begun our 16hr trip south to Danang, not before I threw a protesting smelly dude out of my allocated bed first. The bed sheets were soiled, my head stuck to the damp pillow and I felt mini cockroaches crawling on me in the middle of the night. It was not the best experience I’ve ever had. 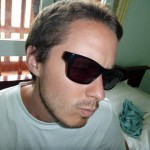 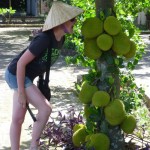 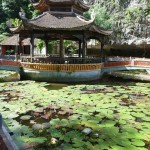 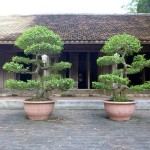 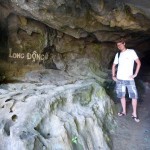 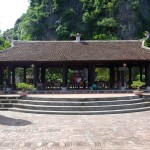 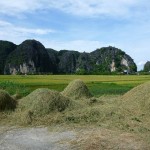 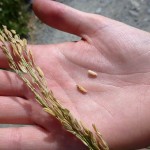 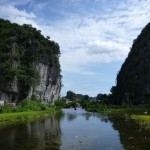 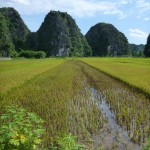 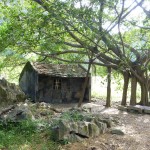 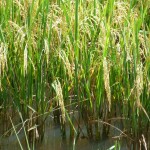 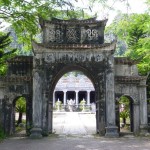 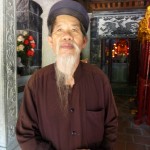 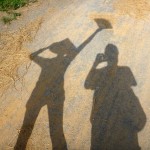 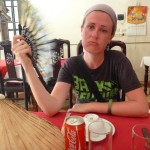 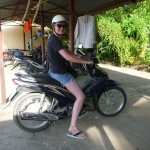 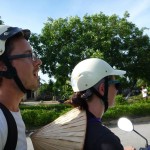 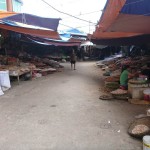 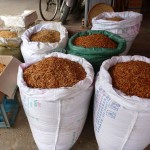 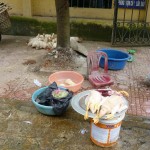 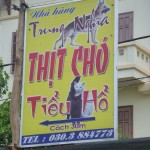 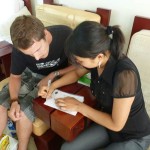 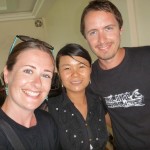 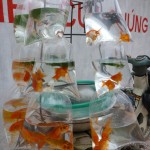 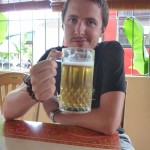 One thought on “Ninh Binh”